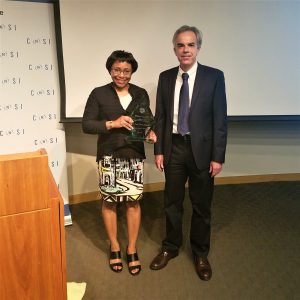 Professor Paula T. Hammond is the David H. Koch Chair Professor of Engineering at the Massachusetts Institute of Technology, and the Head of the Department of Chemical Engineering. She is a member of MIT’s Koch Institute for Integrative Cancer Research, the MIT Energy Initiative, and a founding member of the MIT Institute for Soldier Nanotechnology. The core of her work is the use of electrostatics and other complementary interactions to generate functional materials with highly controlled architecture. Her research in nanomedicine encompasses the development of new biomaterials to enable drug delivery from surfaces with spatio-temporal control. Professor Paula Hammond was elected into the National Academy of Engineering in 2017. She was elected into the National Academy of Medicine in 2016, and into the 2013 Class of the American Academy of Arts and Sciences. She won the ACS Award in Applied Polymer Science in 2018, and she is also the recipient of the 2013 AIChE Charles M. A. Stine Award, which is bestowed annually to a leading researcher in recognition of outstanding contributions to the field of materials science and engineering, and the 2014 AIChE Alpha Chi Sigma Award for Chemical Engineering Research. The newest developments from her lab offer a promising approach to messenger RNA (mRNA) delivery, in which she creates pre-complexes of mRNA with its capping protein and synthesized optimized cationic polypeptides structures for the co-complexation and stabilization of the nucleic acid-protein system to gain up to 80-fold increases in mRNA translation efficiency, opening potential for vaccines and immunotherapies.

The Founders Lectures in Chemical and Biomolecular Engineering are made possible by the Founders Lectureship Fund, established by families, friends and former students of Dr. Sheldon Friedlander and Dr. Ken Nobe. The lectures alternate yearly between series named in honor of Drs. Friedlander and Nobe. The late Dr. Friedlander was the founding chair of the UCLA Chemical and Biomolecular Engineering Department in 1983. He was the UCLA Parsons Professor of Chemical Engineering and director of the Air Quality/Aerosol Technology Laboratory. In 1982 he helped found the American Association for Aerosol Research and later established the Friedlander Award for outstanding doctoral dissertations on aerosol science and technology. He served on the faculty at Columbia University, Johns Hopkins University and the California Institute of Technology before joining UCLA in 1978. While at Caltech he devised a way to analyze the chemical makeup of smog particles, making it possible to identify what came from power plants, refineries, automobiles and other sources. He created classes on new topics related to air pollution and authored the classic text “Smoke, Dust and Haze: Fundamentals of Aerosol Dynamics,” which is now in its second edition. His pioneering work earned him numerous honors, including a Fulbright Scholarship (1960), a Guggenheim Fellowship (1969), election to the National Academy of Engineering (1975), the Fuchs Memorial Award (1990) and the Junge Memorial Award (2000).